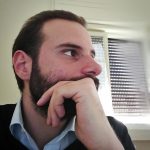 Breaking stuff apart: that’s what Dario did in his childhood. Not because he was a mean boy, but because he wanted to know what was inside and how it worked. Peeking inside seemed the right thing to do.

So he ended up studying Information Technology and doing all things digital, from soldering components together to building complex distributed software systems. He now leans more toward the intangible world of ones and zeros flipping around in the cloud. Software tends to be the most malleable artifact of human inventive, and that fits Dario perfectly.

And then he noted that something was amiss, so he started writing. Mind you, he has always loved writing, since when he was in primary school, but he has started doing it seriously—purposefully—a few years ago.

When he’s not jotting down bits to form words, sentences, and concepts, he works as a Software Architect at an Italian cloud computing company. He loves sci-fi (quite obviously) and woodworking. Oh, and good Italian food.

You can get in touch with Dario via email at dario.solera.author@gmail.com.